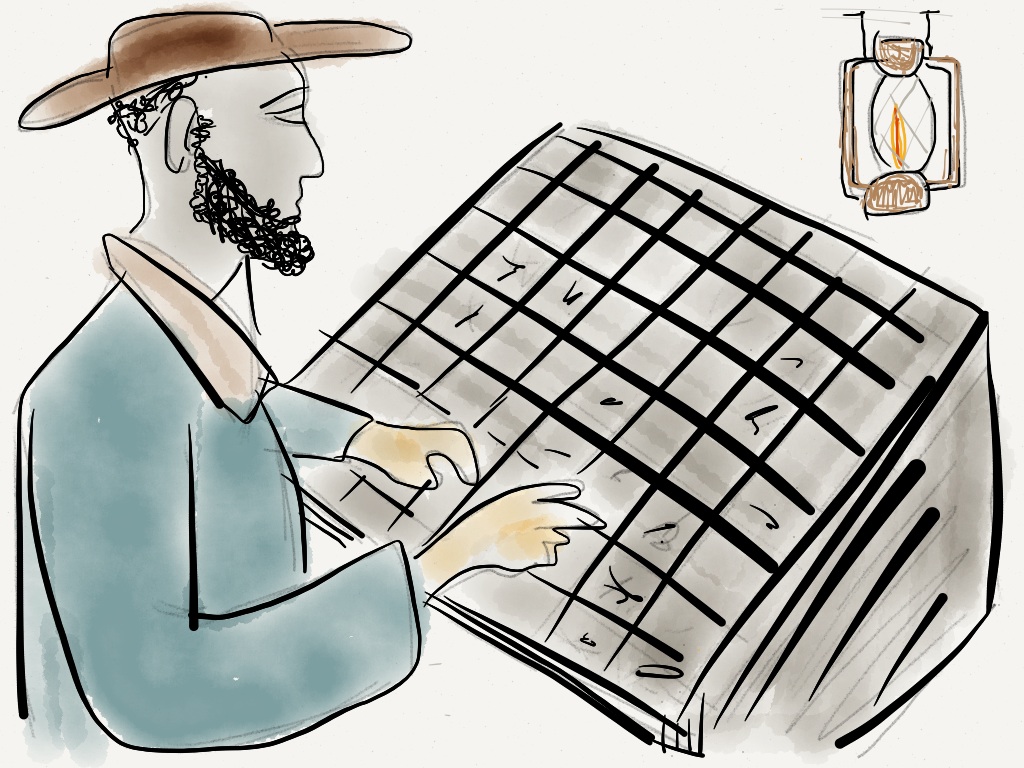 A story of a Typesetter who every day used to arrange the letters in holy books. He did his job faithfully with great love.

The letters were the love of his life, his holy vessel.

Every morning he would clean them of the remnants of the previous day’s ink, and illuminate them against the sun.

When the sun had set he would return them to the pattern of their blackness.

Throughout the day, Rabbi Shraga’s opinion was given to the arrangement of the letters. He was arranging them a mirror in writing, in such a way that the word Genesis seemed like this:

After applying the ink, and using the scroll, the word Genesis looked like this:

The arrangement of the letters from left to right led R. Shraga to think about the work of creation, and the inverse relationship between lights and vessels.

He reduced the breaks given to him at work, and in the time he had left he was looking for letters that did not succeed in the work of arranging. The worn letters found their grace in the wooden box prepared for them by R. Shraga. A thousand (Aleph) who clung to her dreaming, one weak house (Beit), a gangling (Gimmel), and one thin door (Dalet). R. Shraga would place them in the wooden box, gently wipe the ink from them and look at them in the light of the moon.

Every evening, while the printing workers were returning to their homes on the outskirts of the city, Rabbi Shraga would sit with his hidden covetousness, the wooden box, and take out the letters that would weave the story of the day.

The letters were placed in a small structured space.

After checking their order and proofreading, he would spread ink on them (which he had bought from the out-of-pocket money his wife had set aside for him) and place it on the paper which he had kept from any guard.

He would then take the stone roll in his hand and roll it over the paper. He would pick up the paper, let it dry, and pray the evening prayer.

In the blessing “Blessed are you, O Lord our God, the King of the world that in his speech he events the evenings”, he was referring to the dawn of the letters.

Rabbi Shraga would have placed the printed page that dried up between the pages of the Haggadah that was with him and made his way to his house.

When he came home, he happily greeted the presents and hurried to wash his hands.

A table was set and ready in front of him.

After blessing the “giver” (Hamozti), R. Shraga would open the Haggadah, take out his precious story, shine his face to his wife, and read from it with love.