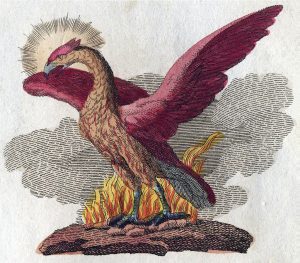 What is the name of the bird in the picture, what is its connection to Adam and Eve, the garden of Eden, and the tree of knowledge, to the letter Aleph, to the sand, and to the fact that it never grows?

In the picture above appears. an illustration of the Phoenix, in Hebrew עוף החול Of Hachol. Ancient lore says that after Adam and Eve ate from the tree of knowledge following the serpent’s advice, Eve fed the whole universe: the animals, the cattle, and the birds. Only one bird which named Chol חול (sand) refused because it was following Job advice, “And in my nest, I shall perish, and like the sand, I shall have many days.” (Job 29:18). And since עוף החול Of Hachol never ate from the tree of knowledge,

The nest in this story is a metaphor to the garden of Eden, and eating signifies development since עוף החול of Hachol did not eat from the tree of knowledge, it never developed an entity and never had to leave its nest meaning the garden of Eden.

An interesting fact tells us Rabbi Yanai about עוף החול Of Hachol that gives us another perspective about it: “Some people say that this bird עוף החול Of Hachol lives 1000 years, and after 1000 years a fire goes out of its nest and burns it, and a little egg survives the flames, from which grows another bird.

So to make it simple, the bird which did not eat from the tree of knowledge represents the creator himself; who doesn’t need to eat and does not need to grow, because he is just being, just existing. That’s why, the flames could not harm him, and it continues to live in cycles of 1000 years which symbolizes the unity.
….