When we take a walk on Haifa beaches, especially at the south shore, there is a great chance that we shall see the blue snail. 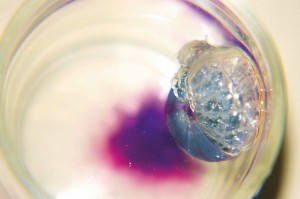 In ancient times the locals used to produce from it the blue color as well as the purple color. That’s why in the Romans times Haifa used to be called after the blue snail in Latin, Porphyron.

The color purple in hebrew is Segol, from this noun was created the verb mesugal meaning “capable”. So when we we see the color purple this is to remind us that we are capable.

Also in Hebrew we use Nikud as vowels: Segol סֶגול

for the sound E

is written with three dots, unlike the Tzere which has only two dots, Tzere is like Tzar צר, narrow, while the Segol is a broad way, because when we have two dots its like two opposites directions, and the third, the additional one, Segol has the capability to bridge the two opposite directions, creating a new way a middle way, containing the opposites using them as a basic to bare a new way which is capable to live with.