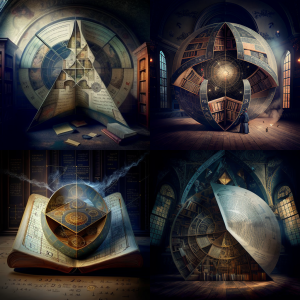 The Book of Zohar, also known as the Zohar, is a central text in the Hebrew wisdom tradition. The Zohar contains commentary on the Torah (the first five books of the Hebrew Bible) and is written in a highly symbolic and cryptic style.

One of the most fascinating aspects of the Zohar is its connections to mathematics. The Zohar is filled with intricate and complex numerical patterns, as well as references to geometric shapes and other mathematical concepts. Some scholars have even suggested that the Zohar was influenced by Pythagorean ideas about the relationship between numbers and the cosmos.

One of the most famous examples of the Zohar’s use of mathematics is its treatment of the number ten. In Hebrew tradition, the number ten is considered to be a divine and mystical number, representing the ten sefirot (divine emanations) and the ten commandments. The Zohar elaborates on this concept, stating that the number ten is the source of all creation and the foundation of the entire universe.

Overall, the Book of Zohar is a fascinating and complex work that incorporates many mathematical ideas and concepts. Its use of numbers and geometry sheds light on the mystical and symbolic nature of ancient Hebrew wisdom, and its connections to Pythagorean thought demonstrate the ways in which ancient mathematical ideas continue to influence religious traditions today.

Here is a link to the book of Zohar of G.Scholem to borrow for free