Cute Butterfly פַּרְפַּר נֶחְמָד Parpar Nechmad is the name of a Israeli kids TV Program which was produced in the 80s and 90s. The program dealt with different topics such as seasons of the year, holidays, families and friendships: The situations were introduced by actors/ singers conversing with puppets. 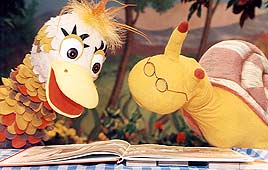 Parpar Nechmad became a mile stone for  children TV programs in Israel. The actors and the singers blew life into every word, expression and movement. The new and fresh texts were written specifically for the program, and the music that was composed to fit the text was pure, simple, rhythmic and rhyming.

Each episode contained few parts, each one matched the listening attention of a child: an opening conversation with the day’s topic, engaging the actors and the puppets; a hand game or finger game, unfolding riddles for the puppets to solve: the puppets solved the riddles and received compliments from the actors for their wisdom.

There was always a story being red by the actors and a book being browsed in front of the camera so that the children could have the experience of turning the pages of the book themselves. Sometimes the text was animated and the experience was like watching a cartoon.

Another important part was a short video that documented children’s lives in Israel during the 70s 80s and 90s. Those videos usually related to the episode’s topic, and were followed by little Plasticine dolls movies.

All of these parts together created a rich and colorful episode with a lot of respect for the children who related to on an eye-to-eye level.

Parpar Nechmad had such a huge cultural impact (beyond publishing books VHS and DVD), that it became popular among both Arab and Jewish Israeli citizens.

Once I was riding a train from Tel Aviv to Haifa in 2000 I noticed an Arabic speaking family sitting with a Hebrew book and reading and singing to their children from Parpar Nechmad in Hebrew.