Today, we would like to recommend you the book: “Roots of the Bible”, by Friedrich Weinreb. Weinreb was born in Lemberg, Galicia, Austria-Hungary in 1910, while in the year 1916, all of his family moved to the Netherlands in 1916. Growing by his grandfather, at his parents home in the Netherlands, he was influenced by the Hebrew sources taught by him, whereas his parents insisted on giving him a secular education.

Weinreb grew up and became a professor of an economy. Dealing with numbers, as a profession from one hand, and knowing the Hebrew sources on the other hand, as well as using gematria, create a beautiful option for him to introduce the western world what was hidden more than thousands of years.

The years of the second world war did not skip him, though, during those years, he helped many people to escape from the Germans, by creating lists of names and asking an imaginary German general in Berlin to mercy them. Eventually, he was caught by the Germans and sent to camps, where even there, in most severe conditions, he found a German officer who was willing to hear about the Bible as a mirror of infinity in time and space. 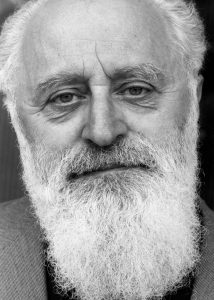 It was many years after the war, that Weinreb was asked to participate a feast with very respectable guests in the Netherlands. The table was long and held all the goodness someone could imagine as a great cuisine. When Weinreb was suggested to approach the table, he took only an apple. One of the distinguished guests did not understand why does he take only an apple, and Weinreb explained.

The Guests were astounded by Weinreb’s answer, and one of them urged him to write a book. This is the book which we recommend today.

For those of us who never heard about Friedrich Weinreb, (who wrote more than seventeen books in German about the Bible, which Roots Of The Bible is the only one of them, that was translated to English)  we shall say that he saw the Bible, not as a history book, but more of as a mirror in which infinite shows itself through time and space, Here is a little taste from chapter 35, The Circle and the Fragments:

Hence, to those who are interested, there are reviews at Goodreads

All the best and joyful reading 🙂