At the temple in Jerusalem Jewish people used to worship God: one of the most famous symbols of worshiping God and freedom of the human spirit was illuminating the Menorah.

In 167 B.C Greek troups lead by Antiochus were in Judea, trying to prevent from the Jewish people to keep their tradition and belief. The Greeks went to the temple in Jerusalem, demolished every Jewish symbol of worship and replaced them with their own idols. The Menorah was taken and the pure olive oil that was used to illuminate it was spilled deliberately on the floor. 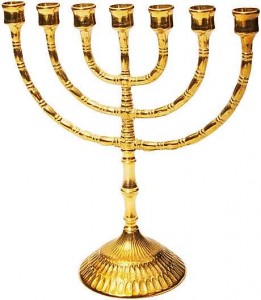 In Modi-in, a village close to Jerusalem, a High Priest (Kohanim) family started to revolt against the Greeks. Followed by Yehuda Hamaccabi they went into Jerusalem and released the temple from the Greeks. After the Maccabbi purified the temple they brought new equipment: “A new altar, table and a Menorah” (Flavius Josephus, Antiquities of the Jews Vol 12) but when Yehuda wanted to illuminate the Menorah only a little cruse of pure oil was left. This little portion of oil was only enough to sustain the Menorah’s light for one day, but a miracle happened and this little portion illuminated the menorah for eight days. 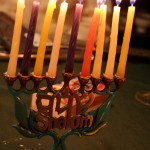 The action of dedicating the altar and the temple to the worship of God was called Hanukkah, and since a miracle happened and the oil illuminated the Menorah for eight days, every year we light eight candles; starting at the first day with one candle, and then every evening we add another one, until the eighth evening when we light eight candles at once.