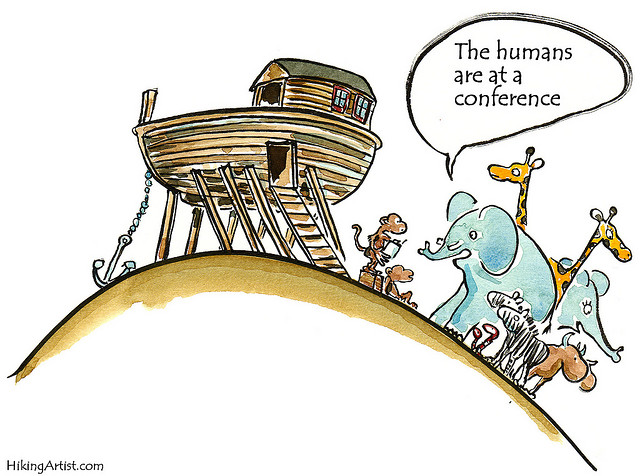 Everybody on the planet knows the story about Noah and the ark from the Bible. But not many people are aware of the alternative and parallel narratives that the Midrash presents us with. (Midrashim are Bible-commentaries and collections of legends that add to the original text and often even contradict it)

The following Midrash מדרש (from the Hebrew root ד.ר.ש meaning; to look for, to seek for higher guidance), re-written for the readers of this blog in the language of Social Media, brings out a unique point of view regarding Noah’s relation to his generation.

One hundred and twenty years before the flood came, there was a message written on a Facebook Wall : “Change the way you behave or I shall change the world around you.” The message which included only 52 letters didn’t catch any attention, while the like button was hit somewhere else, further down the road and the weather catastrophe caught everyone unaware.

Since nobody re-tweeted the message or responded, a heavenly IM was sent to Noah saying, “make yourself an ark made out of gopher wood” (Genesis chapter 6, verse 14).

Noah showing loyalty to the inner voice immediately planted the cedar trees all over the place. When people came to him and asked: “Those cedar trees, what are they for ?” Noah replied:

“I just got an email from Heaven with an attachment saying:”There is an intention to bring flood to the universe. Just prepare yourself and build an ark that you and your family could escape into.”

The people around Noah poked him, saying: “And you ,Noah, you still read emails don’t you? Look at you! Why don’t you download some movies or play xbox in front of a plasma screen? Get out from your cave! Watch out, you might find yourself rotten as fish in a shoe box.”

And among themselves they whispered,”What a weird guy this Noah is, why can’t he have some fun and sit in the sun like everybody else? Life is so simple”.

Noah ignored their humiliating comments and continued to water the cedar trees, which grew beautifully dark and strong .”What do you do?”, asked his close neighbors, sniffing white cocaine around him like hush puppies.

And Noah copied and pasted the text message that he received, reading it to them but nobody really cared, it was a hot summer day and people sat at their porches licking ice-cream opening beer cans and shooting them as high or as far as they could, rolling in their rocking chairs and swinging in their hammocks while the blazing sun was sending down its ultra violet rays.

At that high noon Noah was cutting the cedar trees and chopping them. A new kid in town came and asked,”Hi dude, what do you do for lunch?”

And Noah, tired and most annoyed went into his home brought out a poster (a hand made) took a hammer and a nail and fixed the poster on an information board, saying: “Change the way you behave or I shall change the world around you.”

Though in little letters below it was written that you can download the massage as an mp3 via this and that webpage, nobody followed and clicked on the button since their hands were heavy and their ears were corked with sweat.

Since all warnings and all media messages failed to connect earth or human beings, a Divine Code Blue was activated in heaven, gathering the heavy gray clouds, the winds, the storms and the water chimneys from the sky to create a downpour of such immensity that in later times people were unable to refer to its impossible extent, simply calling it “the flood”.

Questions for the road:

1) Why did Noah built the ark from cedar trees that he had planted and not from existing trees, though it took him a lot of time ?

2) What can we learn from it about patience ?

Some rights reserved by HikingArtist.com