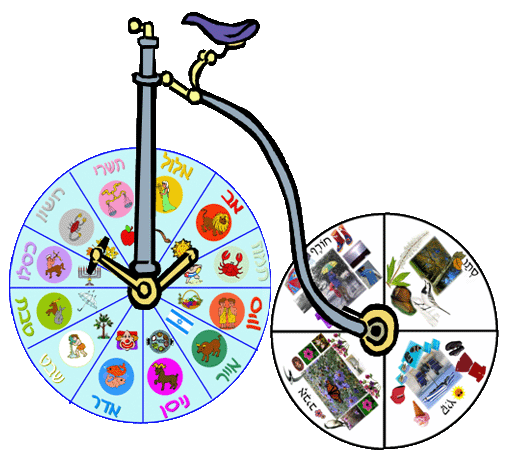 In the previous post , we discussed the first six months of the Hebrew year according to Genesis or the creation of the world. In this post we shall continue the discussion about the remaining six Hebrew months, not before mentioning that the counting of the months has radically changed when the sons of Israel made the Exodus and left Egypt!

In this revolutionary act, the sons of Israel are being informed by Moses that Nissan, (which so far was the seventh month from Tishrei) will be first month saying:

This month [shall be] unto you the beginning of months: it [shall be] the first month of the year to you. (Exodus 12:2)

Nissan נִיסָן is the seventh month from Tishrei: On the 15th of it we celebrate Passover (Pesach פסח), the going out from slavery to freedom.

Iyar אִיָּר  is the eighth month, in it we celebrate Lag Ba’Omer.

Sivan סִיוָן is the nine month, in it we celebrate Matan Tora: The time of the year when the ten commandments, an open code of human behavior were given to us. This is also summer time and the fruit are ready for harvest.

Tamuz תַּמּוּז is the tenth month, in the 17th of it Moses came down from the mountain, and saw the sons of Israel worshiping the golden calf, so as a comment he breaks the boards of the covenant. Since then this day is considered to be a crying day for generations, for the people were not ready to leave behind them the material world.

Av אָב is the eleventh month, on the 9th of it, the temple in Jerusalem was destroyed, and we remember this day of sad destruction and read the book of Lamentations.

Elul אֱלוּל is the twelve month from Tishrei, in the beginning of it we start saying forgiveness at dawn, before the new year is approaching.

And then we come full-circle again, starting with Tishrei.